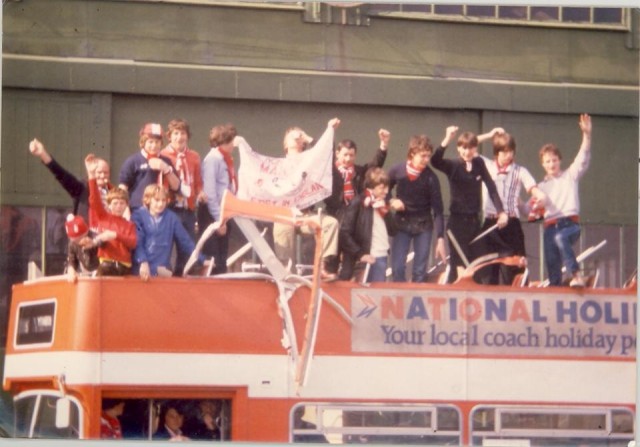 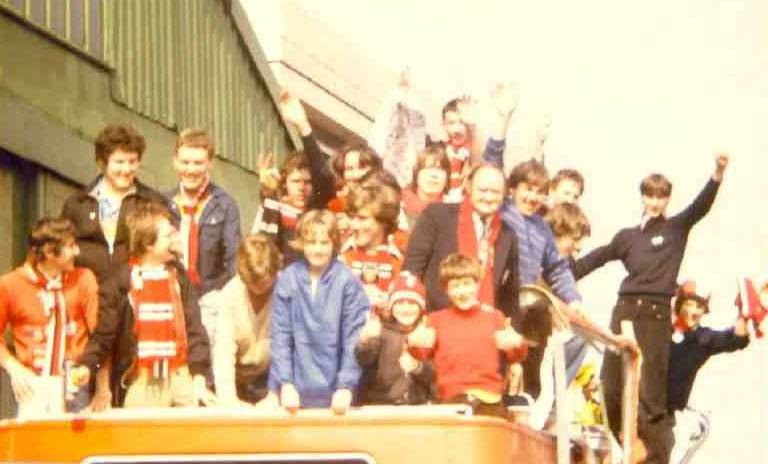 The Blackpool and Fylde Branch of MUSC used to be massive back in the 1970’s and 80’s. We’d have a double decker bus covering the coast from Fleetwood to St Annes and another leaving from Preston for every match played at Old Trafford. They were great days with some proper characters. Well, maniacs may be a more suitable term actually, never a dull moment with MUSC Blackpool and Fylde.

We all boarded the bus one Saturday morning in April 1980, excited at the prospect of seeing United v Liverpool at Old Trafford. In those days they seemed to beat everyone but us, so confidence was high at the anticipation of another victory over the dirties. By the time we got on the bus at Talbot Road bus station, in the centre of Blackpool, the only seats left were on the top deck. I climbed the stairs and headed for the front seat and sat with the guy who used to run the branch, *****.

The bus was nearly full now, with only a few seats left on the upper deck, as we set off for the last pick up point at a station called the Coliseum, which lay about a mile further south down the coast and not far away from Bloomfield Road. The sun was shining, spirits were high and lads were fooling around as normal as the bus trundled through Blackpool and turned into Rigby Road which would take us into the rear of the Coliseum bus station.

As we turned into Rigby Road I turned to *****, as something had just occurred to me. Half way down the road was a low bridge that carried a railway track across it and I pointed this out to him. We both stared straight ahead as the bridge loomed massively in our view. I screamed “get down!” at the top of my voice just moments before we struck it. I hope that my warning shout helped people to get down and out of harms way but it probably just startled them to be honest. The only reaction I got was to have an egg butty hurled at me from the back of the bus! People may have thought that the instruction to get down was an invitation to boogie!

The noise was incredible as the bus careered through the bridge, the roof was torn off and we were showered with broken glass as the windows shattered all around us. The steel posts bolted to the floor and the roof, that housed the bell buttons you used to press to inform the driver that you required the next stop, were whipping wildly from side to side as their fixings went the same way as the roof. We came out the other side looking like a cup winning team – on an open topped bus.

Gingerly, we started to lift our heads up, shaking glass out of our hair. People were screaming and shouting. Looking around there weren’t too many injuries, which was very fortunate; a couple of lads had received nasty cuts to the head from the bell posts whipping into them, indeed, ***** is still scarred to this day and ***** had blood pouring from a wound sustained to his arm. Unbelievably, that was the extent of the damage to the passengers and it amazes me even as I write this and recall the events that nobody was more seriously injured or, God forbid, killed.

Looking at the photographs accompanying this article it’s amazing to see everyone laughing and giving it the thumbs up as they pose for photographs taken by the reds from the bottom deck who were obviously unscathed. None of us seem to be too bothered that we have just been very close to being decapitated. 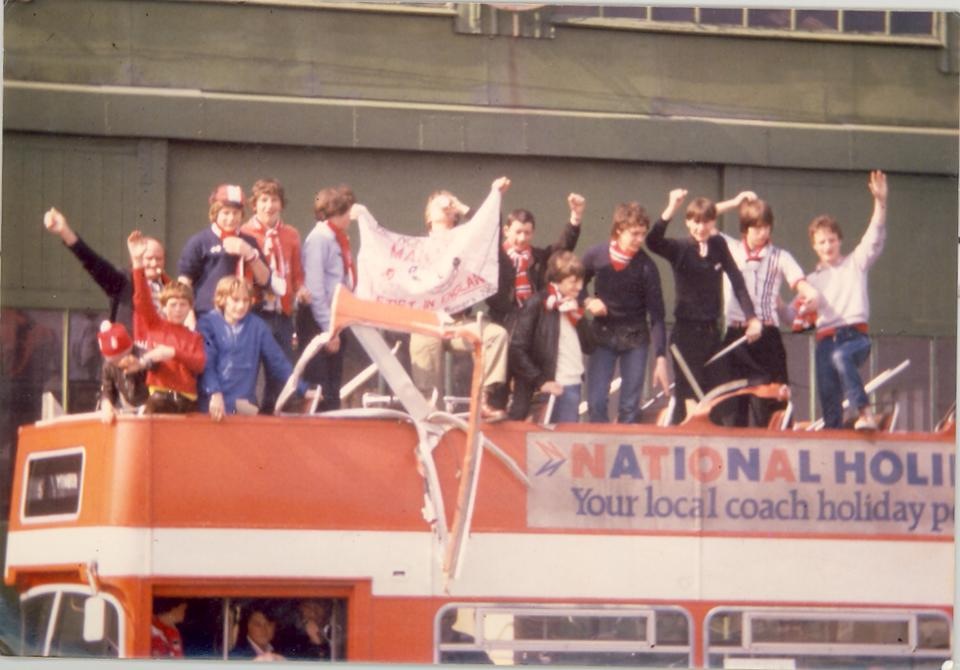 I stood on what remained of the top deck as people started to slowly and calmly get off the bus whilst, behind us, in the middle of the road, lay the mangled wreckage of the roof. Suddenly a voice from the bus shouted something abusive, I looked round to see that holidaymakers were surrounding the bus and taking souvenir snaps of us. They obviously must not have realised that this was a vehicle full of football supporters nor had they gauged the emotions running through us. A couple were actually smiling and waving at us but that was soon stopped as we hurled handfuls of broken glass at the callous bastards.

I got off the bus but couldn’t find *****, I initially thought that he must still be upstairs and went back to get him, no sign. I came back down and could hear him shouting “you bastard” over and over again. He sounded like the kids from South Park every time that Kenny gets killed! I looked around but couldn’t see him at first, then I found him. He was under the bridge kicking the walls, shouting the same thing as he booted it continually. I went over to get him but he must have been in shock as it took some time to get him to recognise who I was and to persuade him to leave the bridge alone and come and sit down.

We could hear sirens around us now as the ambulance and police services arrived. The paramedics were brilliant as they dealt with the injured and those suffering from apparent shock, taking those that were compliant off to hospital whilst the police took statements. Wiff would have none of it though and told them that he had to get to Manchester. But how were we all to get there? Some lads had already spoken with the driver and he had gone to make arrangements with his firm for a replacement bus and after a few minutes he returned to inform us that one would be available in 30 minutes.

The lads who were taken to hospital were all treated and upon their release travelled to the game via taxi. The rest of us boarded the replacement bus and sat back reflecting on what had just happened as we made our way to Manchester. Some people have no luck though. One of the “crazes” at the time was to moon at passing vehicles. This sophisticated form of self-expression was often seen as high wit at the time and I suppose it still is in some circles. Anyway, one young lad, ****, thought he would entertain us as we passed a car on the motorway, unfortunately for him, it was an unmarked police car and they took no time in turning on the siren, passing the bus, flagging down the driver and boarding us to arrest the lad for indecency. Laugh, we nearly shat! There’s nothing like someone else’s misfortune to cheer you up.

We arrived at the ground with only an hour to go to kick-off and made our way to our usual place in the left side of the Stretford End. ***** complained to me that he was in a bit of pain and could do with some headache tablets so I led him to the front of the Stretford where I called over a copper telling him that we’d been in an accident and my mate could do with being looked at. He took one look at the state of ***** and readily agreed to take us to the treatment room.

We climbed through the perimeter fence and he started to walk us around the pitch but of course being that near to the playing surface we just had to walk on it! As we walked around to the tunnel at the half way line the officer asked us where this crash was and wasn’t best pleased when we told him Blackpool. “Are you fucking stupid, coming all this way with an injury like that?” He none too politely asked ***** and his anger didn’t subside much when all he got by way of a reply was a shrug and a dumb-ass smile.

By now we were walking up the tunnel that had been graced by so many greats over the years and there, right in front of us, was Denis Law being interviewed for Radio 2. We couldn’t have cared less what this coppers problem with us was now, the King was within touching distance and another dream had been realised. Once in the treatment room, and believe it or not this was the same treatment room used by the players, a Gladys Emanuel look-alike roughly saw to ***** arm and within 10 minutes we were being frog-marched back to our place on the terraces.

Unfortunately the game is something of a blur, probably because of the events witnessed during the course of the day but more likely by the passing of the years, but suffice to say that we kept our record against them intact and came out 2-1 victors with goals from Jimmy Greenhoff and Mickey Thomas.

One guy took the bus company to court to seek compensation for the injuries he sustained. He took the piss a bit really, as he got a hold of a surgical collar and made out that his injuries were far more serious than they actually were. The judge though fell for it and awarded him £600. This wasn’t enough for this stupid, greedy bastard though so he declined the offer and decided to try again. Unfortunately for him the second judge wasn’t quite as gullible as the first and threw his claim out which caused huge mirth amongst the rest of us. Another thing that came out of the case was the excuse the driver gave for ploughing through a low road bridge whilst driving a double-decker bus. This was his first time behind the wheel of such a vehicle in over a year as he’d been driving single-deckers on a country route. He had noticed the low bridge sign but simply forgot that he was driving a double-decked bus.

A couple of weeks later we were due to play Newcastle at home so I caught my usual bus from the bottom of the street for the trip into Blackpool to catch the supporters coach. The bus route passes through a town called Poulton and as the road turns right towards the town centre it used to pass under the branches of some very large Horse Chestnut trees, (conker trees to the uninitiated). I was sat on the top deck reading the paper when the roof was clattered by the overhanging branches. The sound must have made some impact on my subconscious and I must have looked a right dopey bastard as I dropped the paper and threw myself to the floor. Sheepishly picking myself up and brushing myself down to the sound of laughter from the other passengers I quietly vowed never to use the top deck of a bus again.

This article has 1 comments