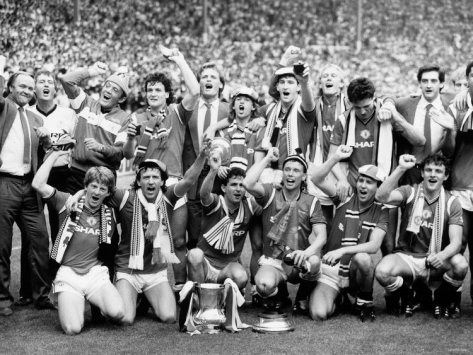 In the days of mass coach travel to away games……. well in the days that the masses could travel to support United. I fondly remember going to Wembley against Everton in 85 by coach. In those heady days of Farah slacks, flicks/mullets and Adidas Samba, it was easy enough to book a coach for morning drives, stag do’s and football matches…..usually if it is cash upfront and no need for receipts.

Well for the afore mentioned trip a coach was organised for the Reds that boozed in and around the Didsbury and Burnage areas. In those dark and distance days coaches comprised of front door, back door, seats with a bit of foam in and windows that rattled like the door of an outhouse when you went above 5o mph, there were no tellies, no bogs and certainly no refreshments, only the customary large bag of cans and the odd party eight!! (remember them?). Well getting back to the toilet on the coach or the lack off….the combination of 50 odd lads, an FA CUP win, copious amounts of warm lager and bitter and the lack of toilet facilities is a very bad one. ( I’d love to see some of them f*ckers from MUTravel handle one of these trips) Well after the second stop within 30 miles of leaving Wembley one of the lads returned with the answer to our problems in the shape of a large refuse bin, the type that every household up and down the country had……….oh the luxury!!

Obviously with the huge amounts of drink that was devoured on the trip, it wasn’t long before our primitive commode needed emptying. The site of two beered up United fans trying to disembark from a coach with a bin three quarters full of pi55 was too much for the driver, in fact he started talking to himself muttering that in all his years of driving coaches he hasn’t witnessed anything like this debacle!

The yellow river created by this coach load of beer monsters nearly reached back to the smoke itself!! The coach driver ( who was about seventy) was disgusted and refused to drive on so he pulled into a services to use the phone to complain to his bosses and arrange for another driver to drop home these fine ambassadors of South Manchester, 20 minutes passed and there was no sign of the driver, exaggerations that he was last seen asking normal drivers who had stopped off for refreshments for a rope were dismissed…30 minutes passed and still no driver, by this stage the bin was nearly due for emptying again when one of Burnage’s finest presented himself at the the front of the coach and preceded to start the engine up…..no way I thought but before you knew we were pulling out of the services minus our oldest addition to the trip……oh well who gives a f*ck he said he wasn’t driving any further and we were on the roll again. The sploshes of the pi55 were drowned out by the cries of were on the march and we won the cup as he preceded to set off down the motorway with can in one hand and a steering will the size of a bin lid! In the other. Other coaches couldn’t believe us as we over took them as our very own highway man saluted them with beer can in handÅcÅc, when he started mouthing look no hands to the other road users a few started to get worried but he managed to manoeuvre us back all the way to the car park of the Parrswood pub where we presented the landlord with not one but 2 souvenirs of our trip to the twin towers.

As a final gesture the shout went up shrapnel for the driver where the whole vault after hearing our escapade decided to chip in and reward our gallant chauffer which resulted him in getting legless, the funny thing was he wanted to bring the coach home to show his wife……..a taxi was called.

I very doubt these days will return but it was great to be there when it was happening!
Thanks lads for the memories and the alcoholic apprenticeship!

Thanks to Shaun and John Lavin RIP